"Diets must be balanced and individualized, since each person requires his or her own food plan according to his or her needs".

Obesity is the most common metabolic disorder in developed society and affects 20% of the Spanish population.

It can manifest itself at any stage of life and its prevalence increases progressively with age. Calculating the body mass index (BMI) is the most practical way to know if obesity exists.

Our Obesity Area is formed by a team of professionals from different specialties. In less than 48 hours we carry out the complete evaluation of a patient by all the specialists according to our protocol of obesity. The objective is to reach the adequate body weight agreed with each patient in a gradual and maintained way.

We have a Metabolic Research Laboratory directed by Dr. Frühbeck, specialist of the Clinic and president of the European Society for the Study of Obesity.

What are the symptoms of obesity?

The symptoms produced by obesity are caused by the increase in body weight itself and by the consequences and complications that this entails, responsible for the reduction in the life expectancy of the obese person.

In addition, the obese ones present/display with greater frequency biliary lithiasis, hepatic steatosis and hiatus hernia. 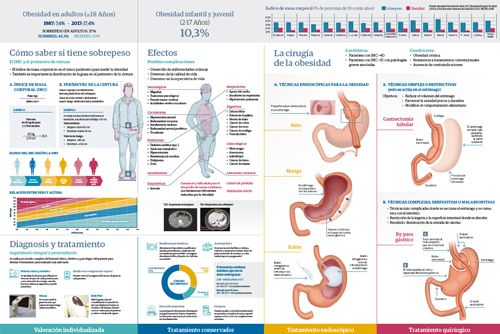 Learn about the types of obesity, how it is diagnosed and treated (only in spanish).

You may have an obesity problem

What are the causes of obesity?

In the vast majority of cases, obesity is produced by an increase in caloric intake, often associated with sedentary activity.

Psychotropic treatments, such as some antidepressants or tranquilizers, and hormonal treatments, especially estrogenic compounds, can promote weight gain.

It is frequent that circumstances that induce anxiety are accompanied by a compulsive eating attitude that favors overweight.

Abandoning the tobacco habit often causes weight gain, although this phenomenon is not necessarily inevitable.

Exceptionally, it can be due to hormonal causes such as hypothyroidism or Cushing's syndrome.

It can also be caused by neurological or hereditary diseases that alter the center of hunger and satiety, which are located in the hypothalamus.

Morbid obesity is an extreme degree of overweight, with a body mass index over 35-40 (BMI = weight in kg/length in m2).

It is a chronic disease that causes the individual to have a poor quality of life and a high risk of suffering severe complications, especially cardiovascular, respiratory and metabolic complications, which compromise their life expectancy.

Childhood obesity may be due to several genetic, environmental or energy-related factors. Approximately 80% of obese children and adolescents will continue to be obese in adulthood.

It is difficult to know if these psychological disorders precede obesity or are a consequence of it. The persistence of childhood obesity into adulthood significantly increases the risk of suffering from diseases such as diabetes mellitus, cardiovascular disease, hypertension and inflammation or gallstones.

Early treatment is extremely important because of the negative consequences it has both for the health and for the state and psychological development of the child and adolescent. The success lies in a change in eating patterns that promote long-term weight loss. This must be complemented by physical exercise (at least half an hour a day) and a reduction in passive activities.

How is obesity diagnosed? 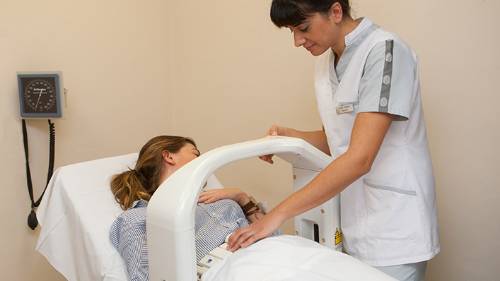 1. Personalized clinical and dietary history prepared by specialists from the Department of Endocrinology and Nutrition.

A detailed medical history will be taken and the appropriate measurement tests will be performed: weight, height and other complementary measurements such as waist circumference, skin fold, etc.

2. Body fat measurement with the Bod-Pod and an indirect calorimetry, which allows to know in an individualized way the energetic expense of each patient. These tests, which are not available in all hospital centers, are routinely performed in the Clinic on all our patients.

3. Other diagnostic tests
When the patient presents associated pathologies, it is essential to know the state of each disease to propose the best treatment. For this purpose, the specialist will indicate the performance of other tests such as the polysomnographic study, cardiological tests, abdominal ultrasound and bone densitometry.

How is obesity treated?

The integral treatment of obesity that we carry out in the Obesity Area of the Clinic is carried out in an individual way, proposing the most adequate strategies for the patient.

To achieve this, there are different alternatives that begin with a conservative treatment, based on changes in the diet and lifestyles of each person. When necessary, there are endoscopic and surgical techniques that help the patient achieve this weight loss.

Its objective is to reach the adequate body weight agreed with each patient in a gradual and maintained way.

1.- Dietary modifications
After taking the medical and dietary history, a personalized diet will be prepared and nutritional education guidelines will be indicated.

2.- Physical exercise
Combining aerobic and resistance exercise on a continuous basis is another of the basic pillars of the comprehensive treatment for weight reduction and maintenance.

Exercise should be done for at least 3 hours a week.

3.- Pharmacological treatment
On some occasions, it is advisable to complete the treatment with drugs. Currently, the only drug that has been scientifically proven to be effective is Orlistat®.

This drug inhibits intestinal absorption of fat consumed in the diet and thus achieves a removal by the feces of 30% of the fat ingested.

We have a team of nurses and nutritionists highly specialized in patients with obesity problems.

It is a silicone device that swells inside the stomach to produce a satiating effect and a decrease in the speed of gastric emptying.

Its implantation is ambulatory by means of a procedure that lasts between 20 and 30 minutes. Its placement and removal is done through the mouth with sedation controlled by an anesthesiologist.

The Digestive Endoscopy Unit of the Clinic has specialists with extensive experience and the most advanced technology. The patient usually carries the balloon for 6 to 12 months, depending on the type of device implanted.

It must always be accompanied by a program of habit modification that includes a strict diet and a change in lifestyle in order to maintain the weight reduction after the treatment.

It is indicated in cases of mild or moderate obesity, when other methods have failed and there are significant health risks (high blood pressure, hyperlipemias, diabetes). In patients with severe obesity, it allows to reduce the overweight before the surgery reducing the risks of the intervention and the possible post-operative complications.

The Clinica Universidad de Navarra is a center of excellence in obesity surgery, certified by the International Federation for Bariatric Surgery (IFSO), the most prestigious institution in the world in this area.

Our surgeons and anesthesiologists have a wide experience of more than 15 years in the handling of the different surgical, laparoscopic and anesthetic techniques specialized in bariatric surgery.

Bariatric surgery is a set of surgical techniques whose main objective is to significantly alter the gastrointestinal anatomy to cause a reduction in the intake or absorption of food.

After the intervention, and with the appropriate follow-up according to the guidelines established by the specialists, a remarkable loss of excess fat is achieved in patients with morbid obesity or with obesity and associated pathologies.

At the Clinica Universidad de Navarra we offer different aesthetic treatments to help in the physical recovery of the obese patient.

Abdominoplasty
Surgical intervention indicated in those patients who want to remove excess skin and fat from the middle and lower abdomen and also strengthen the muscles of the abdominal wall.

Liposuction
Treatment aimed at eliminating fat accumulations, located in different parts of the body, characterized by their resistance to diets.

The Obesity Area
of the Clínica Universidad de Navarra

Our Obesity Area is formed by a team of professionals from different specialties. In less than 48 hours we perform the complete evaluation of a patient by all specialists according to our obesity protocol.

The Clinic is a center of excellence accredited in the treatment and surgery of obesity by the European Society for the Study of Obesity and by the International Federation for Bariatric Surgery.

What treatments do we perform?

Specialists with experience in obesity treatment