"We have the most advanced technology for the structural and functional study of the brain".

Parkinson's is a neurodegenerative disease of the central nervous system whose main characteristic is the progressive death of neurons in a part of the brain.

The most important consequence of this neuronal loss is a marked decrease in the cerebral availability of dopamine, the main substance synthesized by these neurons, originating a dysfunction in the regulation of the main cerebral structures involved in the control of movement.

In order to continue advancing in the knowledge of Parkinson's disease, the Department of Neurology collaborates in the research carried out by the Neuroscience Program of the Cima Universidad de Navarra.

Why at the Clínica Universidad de Navarra

In the Movement Disorders Unit we work as a team of neurologists, neurosurgeons, rehabilitators, neurophysiologists, psychologists, psychiatrists and specialized nurses.

We carry out the diagnostic process and design the ideal treatment plan for each patient in the shortest possible time.

We have the latest technology for diagnosis (3Teslas high field MRI and PET) and treatment, (HIFU and deep brain stimulation electrode surgery).

We work together with the Neuroscience Area of the Cima Universidad de Navarra in the development of new treatments and we participate in clinical trials.

The Clinica Universidad de Navarra incorporates the most advanced model of high intensity ultrasound for the treatment of patients with tremor, rigidity and clumsiness that appear in Parkinson's disease.

What are the symptoms of Parkinson's?

The symptoms mostly affect the patient's motor function starting on one side of the body. The most characteristic are:

Typical manifestations are also facial inexpressivity, lack of automatic movements such as blinking or bracing when walking, the inclination of the trunk forward while walking, etc.

The evolution of Parkinson's is very variable so that in some patients the neurodegenerative process progresses very slowly while in others it may be faster. In general, as the duration of the disease increases, the initial movement disorders become more intense in the hemicycle where they have started and they manifest themselves in the other hemicycle.

In addition, other symptoms may appear such as: 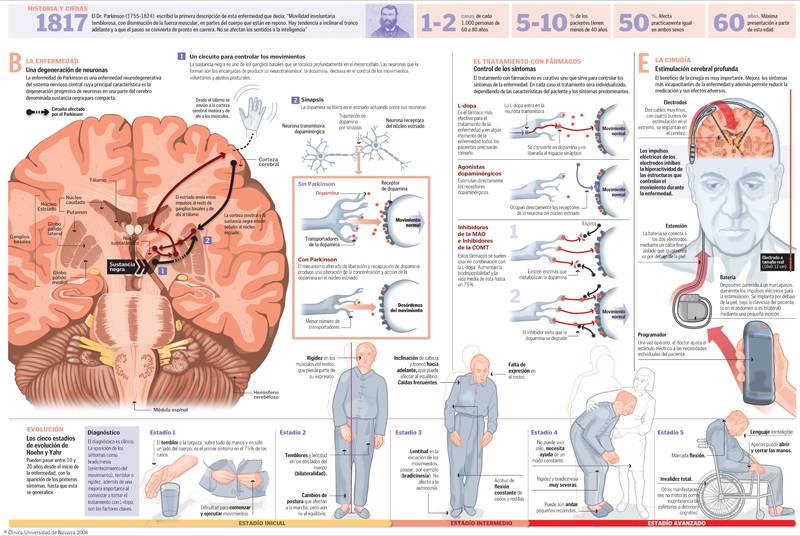 Learn all about Parkinson's disease, how it is diagnosed and treated (available in spanish) 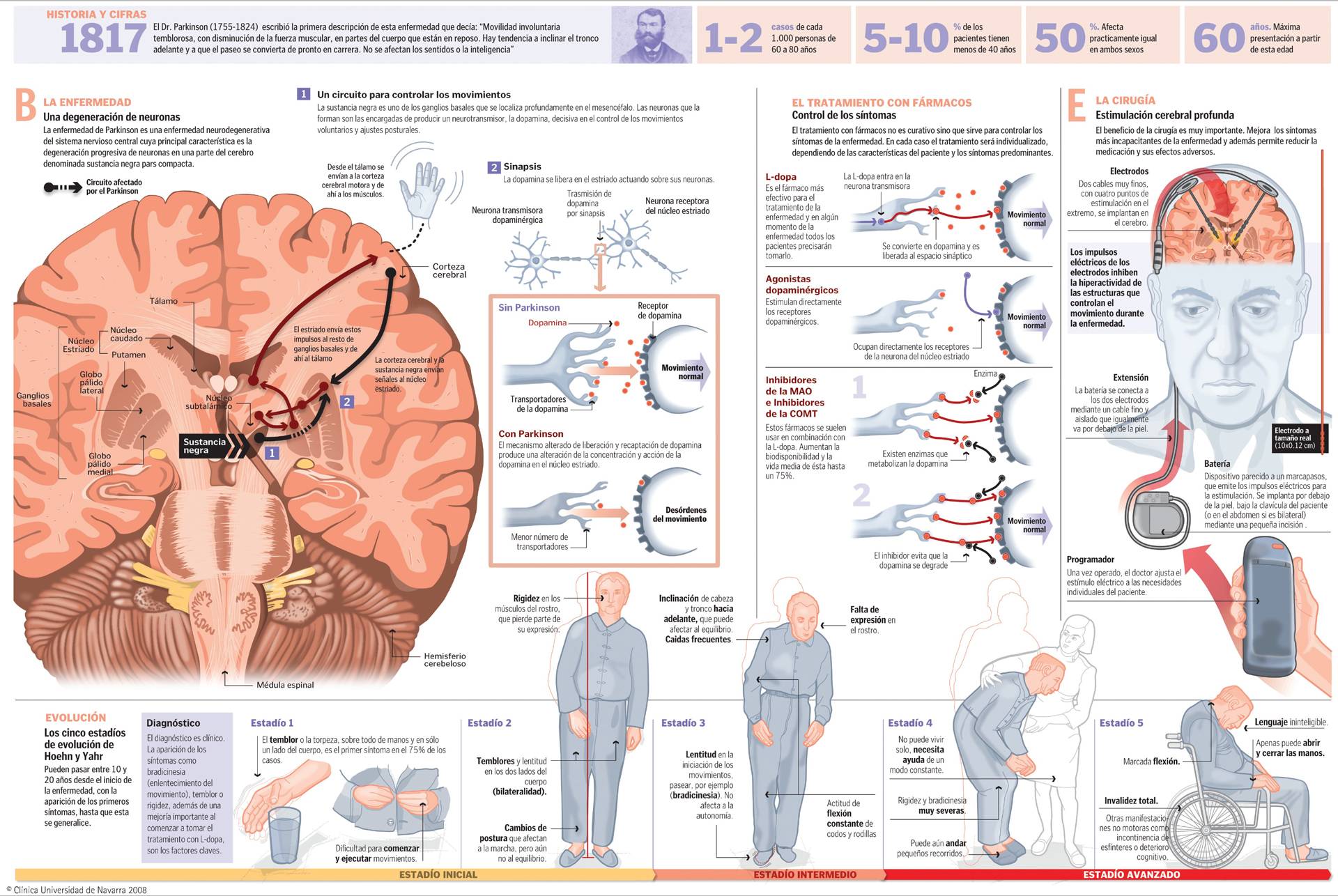 You may have Parkinson's disease

How is Parkinson's disease diagnosed?

Parkinson's is a clinically diagnosed disease. The neurologist makes the diagnosis based on a detailed anamnesis with the data provided by the patient and his or her family and the findings of the physical examination. It is not strictly necessary to perform complementary tests.

In certain patients, the performance of analytical tests, cerebral MRI or PET with F-dopa can help to increase the diagnostic certainty with respect to other processes that share clinical characteristics (atypical and secondary parkinsonism, essential tremor, etc.)

How is Parkinson's disease treated?

In its beginning, the treatment is pharmacological to compensate the brain loss of dopamine. This treatment does not manage to cure the disease, but it serves to control the symptoms.

The treatment of each patient will be individualized. There are four fundamental groups of drugs that can be classified into two groups:

Initially, the treatment improves the signs of the disease in a stable manner throughout the day. As the disease progresses and the motor disorder becomes more intense, the duration of the medication's effect becomes shorter. This results in fluctuations between moments of good mobility during the effect of the medication and moments of bad mobility when the effect is over.

In addition, during the effect of the medication, involuntary movements (dyskinesias) occur in extremities or in the head and trunk. These motor complications occur in most patients in long evolutions.

The impulse control disorder is less frequent and is mainly associated with treatment with dopamine agonists. It consists of an impossibility to resist an impulse, which is harmful to the patient or his or her environment.

The most common are hypersexuality, compulsive gambling and shopping or eating. If they appear, it should be communicated to your neurologist, who will proceed to adjust the medication.

Depending on the characteristics of each patient and the predominant symptoms and complications in each phase of the illness, a personalized pharmacological treatment will be indicated.

The application of this technique is aimed at improving the tremor, rigidity and clumsiness in a hemicorpse, since it is performed unilaterally.

The patient must be evaluated in consultation by a neurologist to determine if he or she is a candidate for this procedure.

In general terms, patients are candidates in which the tremor does not respond to pharmacological treatment or has marked parkinsonian signs with a clear predominance in a hemicorpse.

Surgery is indicated when drug treatment fails to control the patient's symptoms in a stable manner throughout the day.

In cases in which tremor, rigidity or clumsiness imply a significant functional incapacity and require bilateral treatment, a surgical treatment can be considered, which consists of deep brain stimulation through the placement of deep electrodes in the subthalamic nucleus or internal globus pallidus.

These electrodes emit electrical impulses that improve the brain activity and the symptoms of the disease.

The stimulation provided by the electrical impulses is programmed individually, according to the patient's symptoms. After surgery, the patient must attend periodic controls.

The surgical success is related to the adequate selection of the candidate, the good placement of the electrode in the precise area of the brain and the choice of optimal stimulation parameters.

What clinical trials do we have on Parkinson's Disease?

See all clinical studies and trials

The Department of Neurology
of the Clínica Universidad de Navarra

The Neurology Department has extensive experience in the diagnosis and multidisciplinary treatment of neurological diseases.

We offer a diagnosis in less than 72 hours, along with a proposal for personalized treatment and post-consultation follow-up of the patient by our specialized nursing team.

We have the most advanced technology for an accurate diagnosis with cutting-edge equipment such as HIFU, deep brain stimulation devices, video EEG, PET and epilepsy surgery, among others.