"Hypothyroidism is more common in women and affects 2% of adult women".

Hypothyroidism is the clinical picture that results from a reduced activity of the thyroid gland. The thyroid hormones (T4 and T3), whose synthesis is regulated by the TSH secreted in the pituitary gland, have the fundamental mission of regulating the body's metabolic reactions.

Thyroid hormones are essential for most body functions to take place.

Consequently, hypothyroidism is characterized by an overall decrease in organic activity that affects metabolic, neuronal, cardiocirculatory, digestive and other functions.

What are the symptoms of hypothyroidism?

The establishment is usually slow and progressive. The symptoms are related to a decrease in the functional activity of all the systems of the organism.

In extreme situations it can evolve into heart failure, generalized swelling (myxedema), respiratory failure and lead to myxedema coma with loss of consciousness leading to high mortality.

You may have hypothyroidism

What are the causes of hypothyroidism?

The most common cause of hypothyroidism is Hashimoto's thyroiditis which results in progressive destruction of the thyroid as a consequence of autoimmunity phenomena.

It is as if the organism does not recognize the thyroid as its own, so it proceeds to its destruction by means of antibodies produced by the immune system. It is more frequent in women from 40 years old, although it can occur in other ages and in men.

Thyroid surgery for nodules, hyperthyroidism or thyroid carcinoma can also be a cause of hypothyroidism. In these cases there is no autoimmune mechanism, but the removal of glandular tissue leads to insufficient secretion of thyroid hormones into the blood.

Radioactive iodine as a treatment for hyperthyroidism or thyroid cancer is also a cause of hypothyroidism.

Less common is hypothyroidism caused by enzyme defects, often of a hereditary nature, that compromise the synthesis of thyroid hormones. The enzymatic defects can occur with an increase in the size of the gland (goiter). Defects in the development of the gland can produce congenital hypothyroidism that must be detected in the newborn.

Taking antithyroid drugs such as carbimazole, methimazole or propylthiouracil, very rich in iodine (such as the antiarrhythmic amiodarone, cough syrups and expectorants) can paralyze the synthesis of thyroid hormones and/or generate antithyroid antibodies causing hypothyroidism.

Secondary hypothyroidism, produced by lack of TSH secretion by the pituitary gland, is more rare. In these cases the thyroid gland is intact, but lacks its stimulating hormone, which makes it not work, diminishing the thyroid hormones in the blood. In these cases goiter never appears.

Who can suffer from hypothyroidism?

Like other thyroid diseases, hypothyroidism is more common in women. It affects 2% of adult women and 0.1-0.2% of men.

It is from the 40-50 years when the women tend to develop more frequently hypothyroidism of autoimmune cause (thyroiditis of Hashimoto). The postpartum period is equally prone to the appearance of this problem.

Thyroid surgery and the application of radioactive iodine represent risk situations for the development of hypothyroidism, which forces to control evolutionary thyroid function in these cases.

Newborns of hyperthyroid mothers, whether or not they have received antithyroid treatment during gestation, should be evaluated in this regard.

People in whom antithyroid antibodies (antimicrosomal, antithyroglobulin) are detected tend to develop alterations in thyroid function over time, so they should be evaluated chronically on a regular basis.

What is your prognosis?

Under adequate substitution treatment, the quality and life expectancy of hypothyroid patients is not restricted in any way.

How is hypothyroidism diagnosed? 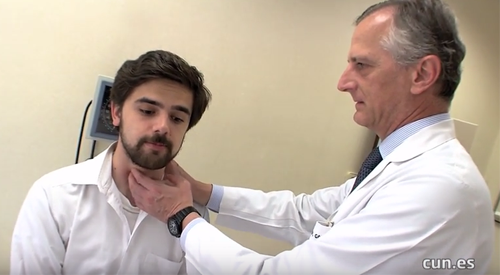 The determination of TSH is the most sensitive parameter for the diagnosis of hypothyroidism. Its elevation is indicative of insufficient thyroid function. This phenomenon occurs before the concentrations of thyroid hormones begin to drop in the blood.

Generally, in the established hypothyroidism, in addition to the elevation of TSH, a decrease of T4 is produced. The level of T3 is often within normal range. It can be accompanied by a determination of T4 and antithyroid antibodies if it is desired to know if the cause is due to autoimmunity phenomena.

If there is goiter, it may be convenient to perform a thyroid ultrasound.

When there is suspicion of alterations in the development of the gland or of enzymatic deficiency, it can be useful to obtain a thyroid scan. If a diagnosis of autoimmune hypothyroidism is confirmed, it is usual to evaluate the association of alterations in other glands such as the adrenal, parathyroid or gonads.

How is hypothyroidism treated?

The treatment of hypothyroidism consists of replacing the production of the thyroid gland. The most stable and effective way to achieve this is to administer thyroxine (T4), as it has a long life and in the body it is partly transformed into T3, so it is not necessary to replace this last hormone.

Once the adequate dose is established by the doctor, the controls that allow the adjustment are based on the clinical evaluation and the determination of T4 and TSH.

With few exceptions, established primary hypothyroidism is a chronic condition, which requires lifelong treatment. However, with the right dose, hypothyroid patients have no limitation in their activities.

The deficit of thyroid hormones is especially important in children, since these are essential for normal mental development and growth. Therefore, in all newborn children, an analysis is made to confirm the correct functioning of the thyroid and, if necessary, to begin treatment immediately.

The Thyroid Pathology Area
of the Clínica Universidad de Navarra

The Thyroid Pathology Area is made up of a multidisciplinary team of specialists who work together to offer patients with thyroid problems an accurate diagnosis.

After the diagnosis, the patient is indicated the most appropriate treatment for his or her case and a continuous follow-up is carried out to achieve the desired objectives.

The Clinic is a pioneer in the implementation of medical techniques in Spain and worldwide, and is an international reference in highly specialized procedures.