"Four out of five women between the ages of 30 and 50 have uterine fibroids".

Uterine fibroids are abnormal masses of smooth muscle tissue that are located in and around the uterus and occasionally in the cervix.

These fibroids originate from smooth muscle cells that exist in the myometrium or wall of the uterus. In most cases they are multiple, but occasionally they can be unique.

Other terms by which these lesions are usually referred to are leiomyomas or uterine fibroids.

Fibroids are usually found in the uterine body, although sometimes they can appear on the cervix.

What are the symptoms of uterine fibroids?

Many uterine fibroids do not present any symptomatology. However, approximately one third of patients who are diagnosed with uterine fibroids present an abdominal mass, abnormal uterine bleeding, pain in the pelvis or lower abdomen, compressive symptoms of neighboring organs, low back pain or urinary symptoms.

The symptom most frequently associated with the appearance of fibroids is abnormal uterine bleeding.

Occasionally they can contribute to a problem of infertility. However, it should be borne in mind that as the sole cause of infertility, they only appear in 2 to 3% of infertile patients. They have also been linked to repeated miscarriages.

In the vast majority of cases these myomas are benign tumors, although statistics indicate that approximately one out of every 10,000 patients with myomas will present a malignant tumor, which is called leiomyosarcoma. In these cases the growth of the myoma is usually rapid, and this must be borne in mind especially in post-menopausal patients. 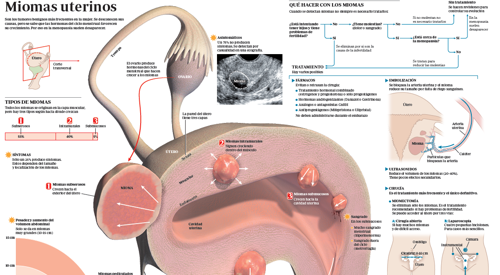 Learn all about uterine fibroids (only in spanish)

You may have a uterine fibroid

What are the causes of uterine fibroids?

The exact cause of uterine fibroids is not well established. But there is evidence to suggest that they require estrogens for their growth; it is accepted that it is an estrogen-dependent tumor.

The hereditary factor may occasionally influence the appearance of uterine fibroids.

Who can suffer from it?

It is estimated that one out of every four or five women has uterine fibroids. They usually occur in women between the ages of 30 and 50 and usually decrease in size after menopause. Often they do not require treatment.

However, they can cause excessive uterine bleeding, pain, pressure sensation, infertility, miscarriage and premature birth.

Surgical treatment can usually correct these problems, but keep in mind that they are likely to recur.

How are uterine fibroids diagnosed?

The diagnosis of fibroids can be relatively simple and in many cases only a simple manual pelvic examination by the gynecologist is required.

The type of surgery that can be used for the surgical treatment of fibroids varies according to their location, symptoms, size and the patient's desire to preserve fertility or menstruation.

How are uterine fibroids treated?

The drugs currently most used in the medical treatment of uterine fibroids are Gn-RH analogues. They are normally used temporarily and can help reduce the size of the fibroids, although on rare occasions they will make them disappear. The basis of this treatment is to reduce the amount of estrogen circulating in the blood by blocking the function of the ovary. Given that these lesions are estrogen-dependent, their size tends to be reduced.

However, it is frequent that when the therapy is interrupted they grow again.

Likewise, this treatment presents side effects similar to those that appear when a woman reaches menopause, such as hot flushes, sweating, vaginal dryness, mood swings and sometimes loss of bone mass.

The type of surgery that can be used for the surgical treatment of fibroids varies according to their location, symptoms, size and the patient's desire to preserve fertility or menstruation.

In small fibroids located in the uterine cavity or in contact with it (intramural fibroids), surgical hysteroscopy can be performed. This technique consists of introducing a small camera (hysteroscope) into the uterus and proceeding to the exeresis of the intrauterine fibroid. It requires general or regional anesthesia, although the post-operative recovery is very fast

Myomectomy
In this case, only and exclusively the exeresis of the myoma is performed, preserving the uterus that must be reconstructed during the surgical act. This technique is the ideal one to practice in those women who wish to preserve their uterus, either because of future fertility desires or because they do not want to lose their menstruation.

It should be noted that the practice of a myomectomy does not prevent the possibility of new uterine fibroids appearing in the future. Additionally, approximately one third of the patients who undergo myomectomy will subsequently require a hysterectomy.

Hysterectomy
In this case, this surgery consists of the total exeresis of the uterus. These last two surgical techniques can be performed either by laparoscopy or vaginally, that is to say without opening the abdomen, or by laparotomy, surgery in which the abdomen is opened.

The choice of one route or the other will depend on a series of factors such as the size of the fibroids, their location, the surgical skill of the surgeon, etc. Others: Uterine artery embolization leads to necrosis due to lack of irrigation. Indicated in some cases with good results. It is an intermediate step between surgery and medical treatment.

It has good results in selected patients, although sometimes the side effects, especially postoperative pain may need specific treatments.

The department also offers routine pregnancy monitoring that includes a variety of diagnostic and screening procedures to identify potential problems of the fetus as well as its proper growth and development.

Our Department of Gynecology