The Thoracic Surgery Department routinely works in conjunction with the rest of the departments in our centre. This makes it possible to offer a comprehensive therapeutic approach that improves attention to the patient, achieving the best results.

If you require the opinion of our experts without having to travel to the Clinica, we offer the possibility of a Second Medical Opinion consultation.

If the diagnostic tests confirm that the patient has localised lung cancer, the surgical approach is possible in a high percentage of cases.

It is essential to establish, using respiratory function tests, if the patient is in a condition to be able to have surgery.

To do so, we analyse whether the lung capacity will be sufficient after the operation. 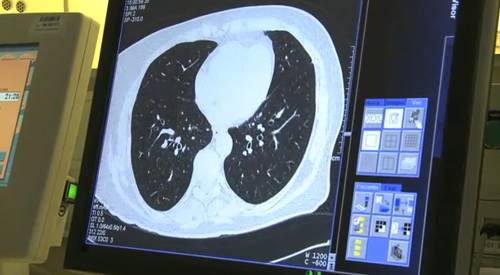 Having an annual CAT scan done is effective in reducing the deaths from lung cancer.
Learn more about lung cancer

The objective of this procedure is to drain the pleural space after pleural effusion.

What are the pleura?

Pleura or pleural space refer to the space there is between the lungs and the chest wall. In normal conditions, there is a very small amount of fluid that helps the lungs to move when you breathe.

When fluid builds up in the pleural space, the condition is called pleural effusion.

Based on the type of fluid it is, the effusion can have various names:

This is a technique used to drain the pleural space. If the problem is not solved with this procedure, a surgical intervention using thoracoscopy is required, making it possible for a speedy recovery with minimal trauma.

When the fluid is thick and condensed, video-assisted thoracoscopy is performed. This is a technique that makes it possible not only to drain the fluid, but also to manipulate the thorax internally.

Surgical treatment to remove a tumour located in the mediastinum, the thoracic area that occupies the space between the lungs.

The most common mediastinal tumours are the thymoma, lymphoma, intrathoracic goiter, neurofibroma and teratoma.

At times, invasive diagnostic techniques become necessary to establish the type of lesion. They vary according to the location of the tumour.

Such methods include, among others:

In the latest years, video-assisted thoracoscopy has been added to the diagnostic and therapeutic arsenal for many mediastinal tumours. In the case of malignant tumours, an extensive study and a surgical assessment are performed, which can be done before or after other therapeutic measures (chemotherapy and radiation therapy) are given.

When a malignant tumour located outside of the mediastinum spread to ganglions in it, surgical therapy is impossible. It will depend on the treatment for the originating lesion, which is almost always chemotherapy and radiation therapy.

The patient’s age and other serious illness occurring simultaneously with the tumour process could also make surgery contraindicated.

Emphysema is a chronic lung disorder that affects the small airways, or alveoli.

This circumstance impacts the interchange of gases, limits exhalation and is accompanied by chough and makes breathing difficult.

The most frequent cause of this disease is smoking. However, it can also be produced by exposure to air pollution air, gases and irritating dusts, as well as by some hereditary diseases.

The treatments are generally only palliative. They include drugs, oxygen therapy, pulmonary rehabilitation, reducing lung volume through surgery and lung transplant.

This procedure has strict medical indications. It is consequently limited to a very specific group of patients with emphysema and can also have complications. For those reasons, the patient must be told about the risks and possibilities of improvement the procedure involves.

The diaphragm, which has been pushed downwards, recovers its normal position normal and that makes breathing easier. This means that lung hyperinflation and air flow obstruction are reduced, producing an increase in exercise capacity.

Mesothelioma is a rare type of cancer in which the cancerous cells invade the pleura (the membrane that covers the lungs).

It appears more often in men than in women, usually at the age of 50-70.

Diagnosing mesothelioma pleural is, frequently, very difficult because its symptoms are similar to those of many other conditions. To confirm the diagnosis, a biopsy is required to confirm the diagnosis. After that, the stage the disease has reached must be established, in order to begin the most effective treatment.

The most common clinical presentation is diffuse thoracic pain, which can be either pleuritic or radiating to the shoulder, accompanied by pleural effusion. Other symptoms usually associated with this disease are difficult, laboured breathing, cough, weakness, general discomfort and fatigue.

Types of surgery for treating mesothelioma:

Treating pleural mesothelioma with a curative intention involves administering chemotherapy and radiation therapy in conjunction with the surgery.

Metastatic, or secondary, lung tumours are malignant tumours that develop in other sites and spread to the lungs through the bloodstream.

The most common tumours that extend to the lungs through metastasis are, among others, colon cancer, breast cancer, osteosarcoma and soft tissue sarcoma, melanoma and genitourinary tumours.

However, almost any kind of cancer is capable of spreading to the lungs.