Internal Radiotherapy or Brachytherapy is a special radiation technique which involves inserting a radioactive source (radioisotope) in the tumour or the cancer site (healthy tissue close to the tumour which remains after the removal of the tumour and has a high risk of containing residual microscopic diseases).

This technique is mainly used for sarcomas, genitourinary and gynaecological tumours.

The Clínica Universidad de Navarra is one of the international reference centres for carrying out intraoperative implants and radiation treatments with postoperative high dose rate brachytherapy on specific types of tumours.

If you require the opinion of our experts without having to travel to the Clinica, we offer the possibility of a Second Medical Opinion consultation.

Brachytherapy uses a radioactive source in the tumour or the cancerous site.

Temporary interstitial implants are used to introduce the radioactive source into the tumour or the cancerous site from which the tumour was removed using special devices or applicators.

There are many types of applicators (catheters, needles, cylinders, tubes, balloon systems, etc.); many of which are specific to each treatment. Their shared characteristic is that they are all openings that allow for the insertion of a radioactive source which is controlled from a distance and releases radiation, from the inside.

Temporary interstitial brachytherapy is used to treat a variety of tumours: prostate, gynaecological, breast. Generally, it is used as a complementary technique to external radiation for administering an extra dose of radiation (overprint or boost) on the tumour or cancerous site.

Temporary interstitial brachytherapy can be carried out during the removal of the tumour (whilst the cavity is open). This method takes advantage of surgical procedure by directly treating the cancerous site (which has the highest risk for containing residual microscopic remains of the disease) and can be inserted with a series of fine plastic tubes (catheters) which are used to carry out perioperative radiation treatment.

The advantages of an implant in the open cavity are: minimising errors in examining the risk zone and administrating radiation treatment in advance, adjusting the dose of radiation according to the distance of the tumours from the surrounding tissue.

The most frequently used permanent implant in the clinical field is a low dose rate implant with 125Iodine seeds for prostate tumours. 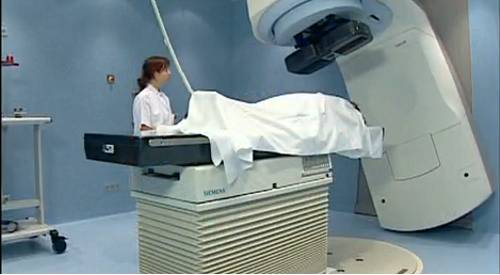 The Clinica Universidad de Navarra is a reference centre at an international level for its experience in Intraoperative Brachytherapy treatment.

It was the first Spanish centre to carry out Intraoperative Brachytherapy, which notably reduces the time required for administering radiotherapy.

It consists in partially irradiating the tumour thanks to the implantation of minimally invasive catheters, in the same surgical procedure in which the tumour is removed.

During the surgery, 5-10 plastic tubes are implanted into the surgical cavity where they remain after the removal of the tumour, as there is a risk of contracting residual microscopic tumorous diseases which have not been removed by the surgeon. These tubes are fixed in the surgical cavity and are extracted from the surface or in surgical drainage.

After the operation, when the patient is in a good condition to move around, a planning CT scan is done to verify that the plastic tubes have been correctly positioned and are at a distance from the normal tissue which is unaffected by the tumour. With this scan, a personalised dosimetry is carried out.

A pathological anatomy report is created, after which specialists decide if it will be necessary to treat the patient using intraoperative brachytherapy, the necessary dosage and the possible benefits of combining the treatment with radiotherapy and chemotherapy one month after the operation.

The Clínica is one of the first centres in Spain to use Accelerated Partial Postoperative Brachytherapy for breast cancer, which consists in the partial irradiation of the breast using catheters, in the same surgery in which the tumour was removed.

Afterwards, the catheters allow for the administration, on an out-patient basis, of the total radiation necessary in a period of 5 days (2 daily sessions), compared with the six weeks which are necessary for conventional radiotherapy.

The radiation is administered using a small radioactive source of iridium which moves through the inside of the implanted catheters. The radiation treatment is planned using a 3D navigator of the breast which allows for the very precise allocation of high dose rate radiation in the areas which need it the most, reducing the radiation on healthy organs like the skin, heart and lungs.