"The best indication is the treatment of selective areas, not large areas, which remain stable and have not responded to conventional medical treatments.”

Vitiligo is a skin disorder of unknown cause which is characterized by the presence of white spots due to lack of pigmentation.

It is a disease that affects 1% of the world's population, being more frequent in those races that have a greater amount of skin pigmentation.

It is believed that there is a greater prevalence in women and the age of appearance is between 10 and 30 years, although it can appear at any time of life.

In the indicated cases, surgical treatment is 90% effective, being a highly recommended alternative.

What are the usual symptoms of vitiligo?

The usual symptoms of vitiligo are white depigmented spots on the skin as there are no melanocytes in these areas.

These spots are more sensitive to sunburn, so it is advisable to use sunscreen.

The contrast with the pigmented areas of the skin creates a major aesthetic problem for the patient. 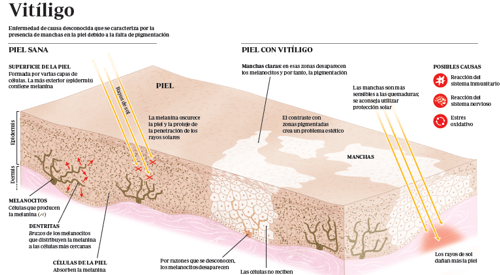 You may suffer from vitiligo

What are the causes of vitiligo?

The cause of melanocytes disappearing or ceasing to synthesize melanin is not known exactly.

Different theories have been formulated, highlighting mainly the one that considers this disease to be of autoimmune origin.

It has been observed that situations such as stress or trauma can precipitate the appearance of these lesions in predisposed patients.

Sometimes it is associated with other types of diseases such as diabetes, pernicious anemia, Addison's disease or thyroid diseases.

How is vitiligo diagnosed?

The diagnosis is established in most cases by clinical examination of the patient's skin.

Sometimes, the slit lamp or Wood's lamp can be used. This is an ultraviolet light that makes areas without melanocytes appear bright white.

Sometimes a skin biopsy must be done to rule out other autoimmune diseases, as well as blood tests for thyroid hormones or vitamin B12.

How is vitiligo treated?

In the case of more extensive vitiligo, what is known as oral photochemotherapy is usually used, which consists of the administration of an oral drug (psoralen) plus exposure to UVA rays (PUVA). Repigmentation is sometimes achieved in 50% of the cases.

Another type of treatment used in vitiligo of moderate extension is the application of Kellina topically plus sun exposure. Never more than half an hour. The administration of amino acids such as phenylalanine both orally and topically accompanied by sun exposure is another therapeutic modality used in vitiligo.

Good results have also been obtained with calcipotriol topically, which is a drug used in psoriasis, and with calcineurin inhibitors.

Lately, there is an increasing number of publications about the surgical treatment of vitiligo, using autologous skin grafts or selective melanocyte cultures.

This new technique consists of transplanting the patient's own epidermal cells (skin cells) from a pigmented area to certain areas that appear depigmented.

In general, this cell therapy technique has been applied in those areas where a more satisfactory response is expected, such as the facial region, which is also the one that most often interests the affected people. There are other areas of the body where repigmentation is not so good, such as the hands, where the appearance of vitiligo is also frequent.

The best indication is the treatment of selective areas, not large areas, which remain stable and have not responded to conventional medical treatments.

Finally, in those patients where the areas of vitiligo are larger than those of normal pigmented skin, the treatment may consist of depigmentation of the healthy skin by means of topical hydroquinone at high concentrations.

Cell therapy for the treatment of vitiligo is a technique that starts with the culture of epidermal cells, a mixture of keratinocytes and melanocytes, and then proceeds to selective cultures, so that they constitute a monolayer on the amniotic membrane support.

The procedure developed by a team of specialists of the Clinic, begins with the obtaining of a biopsy (small surface of skin) extracted from a hidden zone, as it can be the lumbar region or the buttock, that is pigmented.

The skin sample is then processed in the Cellular Therapy area. There, in an enzymatic way, they separate the epidermis from the dermis to obtain, from the already disintegrated epidermis, the cells necessary for the culture.

The obtained cell units are then cultivated on amniotic membrane until the growth of millions of cells is achieved.

The application of the amniotic membranes with the epidermal cells in the patient is performed in the operating room:

The surgical technique is ambulatory and is performed under local anesthesia.

In general, this cell therapy technique has been applied in those areas where a more satisfactory response is expected, such as the facial region, which is also the one that most often interests the affected people. There are other areas of the body where repigmentation is not so good, such as the hands, where the appearance of vitiligo is also frequent.

The Department of Dermatology
of the Clínica Universidad de Navarra

The Department of Dermatology of the Clinica Universidad de Navarra has extensive experience in the diagnosis and treatment of dermatological diseases.

We have extensive experience in highly precise surgical treatments, such as Mohs surgery. This procedure requires highly specialized personnel.

We have the latest technology for the dermo-aesthetic treatment of skin lesions, with the aim of achieving the best results for our patients.