"Scoliosis is a problem that can occur in more than one family member, in the same or successive generations".

Scoliosis consists of the lateral deviation or left or right deviation of the spine.

The cervical and lumbar areas have lordosis and the thoracic and sacral areas have kyphosis. Normally we speak of cervical lordosis, thoracic kyphosis and lumbar lordosis.

In more than 85% of the cases its cause is unknown. In the rest of the cases it is due to defects in the formation of the spine during the embryonic life or it is a sign that accompanies other general illnesses, such as muscular dystrophy or Marfan's Syndrome.

What are the symptoms of scoliosis?

Seen from behind a normal spine is straight, so that the back appears symmetrical.

When there is scoliosis, the spine is curved and one or more of these signs can be seen:

History of Raquel, a scoliosis surgery patient at the Clinica Universidad de Navarra (available in spanish)

You may have scoliosis

How is scoliosis diagnosed?

Scoliosis is usually suspected at a routine pediatric checkup.

When the pediatrician observes some of the symptoms to request a spinal x-ray to evaluate if there is spinal deviation and the degree of it.

Sometimes, the child or adolescent will be referred to the orthopedic surgeon for a more specific evaluation.

How is scoliosis treated?

Exercises and rehabilitation do not reduce the magnitude of the curve or the risk of progression, but these measures can be used as an adjunct treatment to improve posture and strengthen muscles.

Only a small number of patients with curves of less than 20º progress. Orthopedic measures do not prevent scoliosis progression in patients who have reached the end of the growth stage.

In 85-90% of cases, no surgical treatment is necessary.

Surgery may be necessary in case of very large curves with constant progression or if the patient requests a surgical intervention to improve his/her physical appearance (for aesthetic reasons).

Surgery can prevent progression and correct the deformity. Usually the surgeon uses metal implants (rods and screws/hooks/wires) to correct and hold the area of the deformity until the operated vertebrae have been joined (fused). Bone fusion ensures permanent stability.

Surgical treatment is usually indicated for growing patients with curves of more than 60° or 40-60° and evident progression despite treatment with orthopedic measures. If the patient considers that a curve of more than 40º is an unacceptable deformity, he or she can also be operated on. 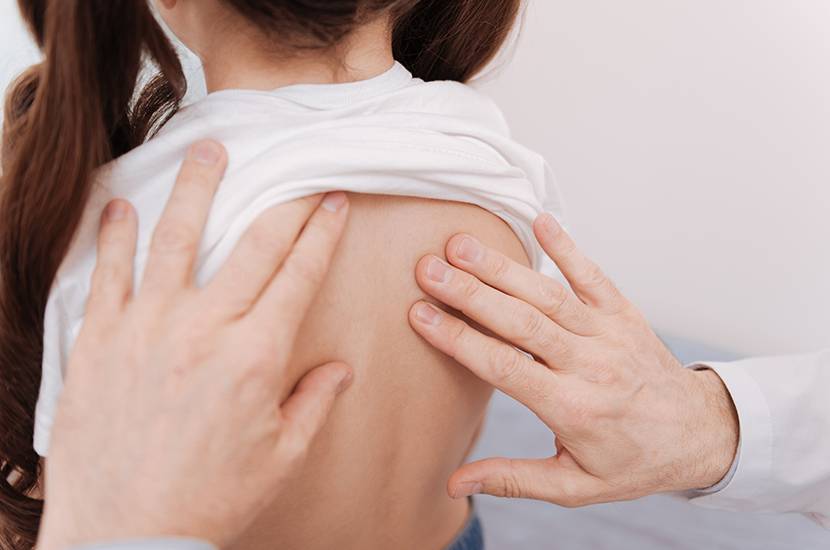