Stimulation of the hypoglossal nerve for the treatment of OSAS

"There are very effective treatments that can change the patient's quality of life in a very noticeable way".

Obstructive sleep apnea is a breathing disorder that is caused by intermittent and repetitive obstruction of the upper airway during sleep. Such blockage results in a complete (apnea) or partial (hypopnea) interruption of airflow. This syndrome affects about 4% of the adult population, according to international epidemiological studies.

The syndrome of apnea of the dream frequently takes place by a collapse of the superior aerial route, often produced by the flaccidity of the weaves or by other causes, like the obesity since, if fat is accumulated in the neck, it tends to exert pressure in the aerial route.

It may also be due to anatomical alterations that the patient may present as large tonsils, very large tongue base or bone alterations.

This new treatment consists of the electrical stimulation of the hypoglossal nerve, the nerve responsible for the movement of the tongue. By stimulating it, it manages to push forward the base of the tongue and the palate of the patient, preventing the blockage of the airway and allowing the entry of air during sleep.

Stimulation therapy of the hypoglossal nerve allows effective treatment, without the need to wear a mask.

Do you need us to help you?

I want to make an appointment
REQUEST MORE INFORMATION

When is hypoglossal nerve stimulation indicated? 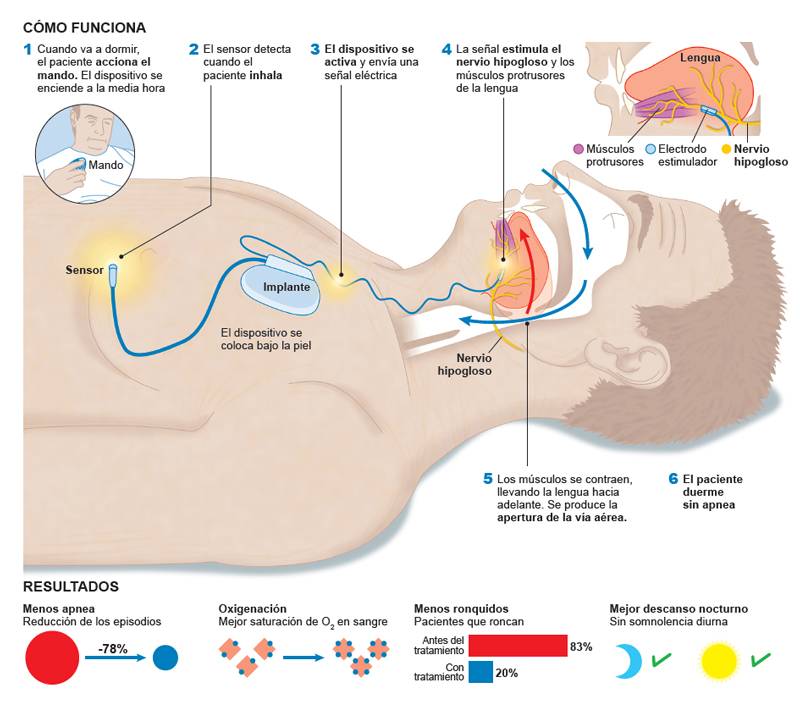 Learn how the hypoglossal nerve stimulator works (available in spanish) 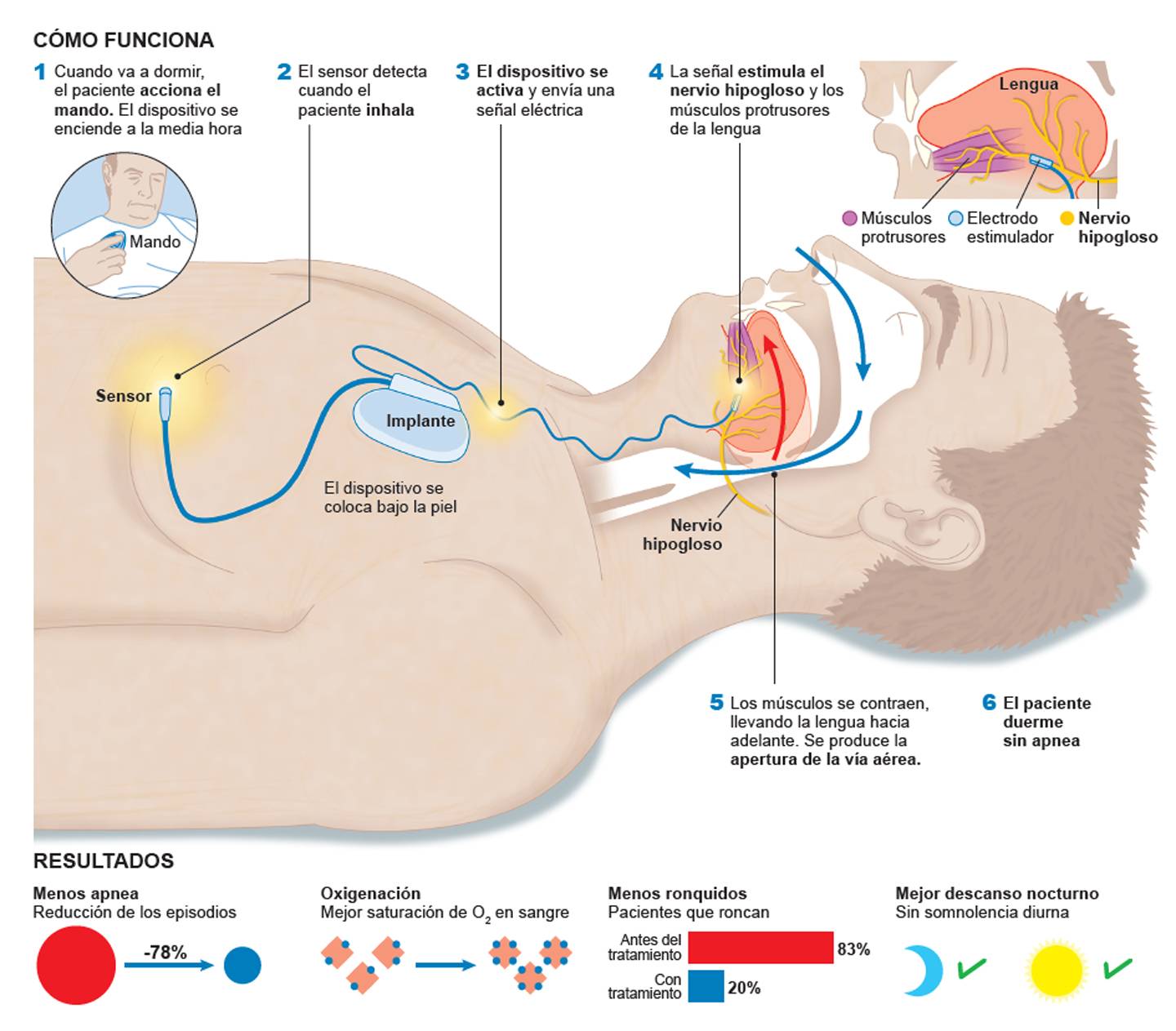 Do you snore in your sleep and pause for apnea?

The only hospital in Spain

We are the only center that has implanted this device in Spain and we have an experience of more than 20 patients with excellent results.

How is hypoglossal nerve stimulation performed?

The hypoglossal nerve stimulation procedure to treat sleep apnea is simple and consists of the subcutaneous implantation (under the skin), in the anterior area of the thorax, of a stimulator, similar to a pacemaker, to which a sensor is connected. In turn, the sensor cable is inserted, through another small incision, into the wall of the chest where it detects inspiration. It is then that the sensor sends a signal to the stimulator, from which a discharge is emitted that reaches, through a cable, the hypoglossal nerve.

In this way, the muscles at the base of the tongue and the palate are stimulated forward, opening the airway and facilitating normal breathing.

The patient requires only 24 hours of hospitalization and the intervention lasts approximately 2-3 hours. After one month, the stimulator is activated and the patient is taught how to use it. A check-up is then performed the following month with a sleep study to fully adjust the device.

Once adjusted, the activation of the device is done by the patient himself, every night by means of a control, when going to sleep. After 30 minutes, the device begins to work.

The device works for 8 hours, and if the patient wakes up during the night he or she can put it on pause. The advantage of this equipment is that the intensity can be adjusted according to the patient's needs.

Where do we do it?

The Department of Otolaryngology
of the Clínica Universidad de Navarra

The Department of Otorhinolaryngology of the University of Navarra Clinic is a national and world reference in numerous highly specialized surgical procedures.

We have the latest technology and we perform all diagnostic tests in less than 48 hours in order to offer our patients the best solution in the shortest time possible.

We were one of the first centers in Spain to use robotic surgery in the surgical treatment with the Da Vinci® System.

Our Department of Otolaryngology