"In less than 10% of the cases of disc herniation, the treatment is surgical".

Herniated disc is a disease in which part of the intervertebral disc (nucleus pulposus) moves to the nerve root, presses on it and produces intense pain.

If the herniation is voluminous and compresses all the nerves it encounters, it can produce what is called cauda equina or ponytail syndrome, which is a surgical emergency.

In most cases, this pain subsides with conservative treatment without surgery. However, approximately 10% of them will require a surgical intervention for their treatment.

In the Clinic we have the most innovative technology for a correct diagnosis and we have extensive experience in performing the latest surgical techniques, with special interest in minimally invasive surgery for a better patient recovery.

What are the symptoms of a herniated disk?

The symptoms of disc herniation are usually acute, sudden and violent in intensity. It includes symptoms typical of the disc rupture and others caused by the pressure of the hernia on the spine or nerves.

Neither swimming nor any exercise is helpful in preventing, relieving, or treating a real herniated disk. The pain becomes so severe that it is usually not relieved by anything you have at home. But even so, we must not forget that there are many other pictures of pain similar to that of a herniated disk that are not. If it is a hernia, the symptoms of acute local back pain precede or coincide with the neurological symptoms (continuous sciatic pain up to the foot, muscular weakness, tingling...), the distinctive element of the herniated disc.

Sciatica (pain radiating to the lower extremity) is the most characteristic symptom, varying the distribution of the pain according to the territory in which each affected nerve root is located. It also causes pain in the lumbar area by the sensitivity of the disc itself.

The pain is typically greater when coughing and sitting down (for example, riding in a car) than when lying down; it is usually greater when standing still than when walking. Another frequent symptom is paresthesias (tingling sensation) in leg and foot.

It can also lead to loss of strength in the leg and very rarely to urinary incontinence. 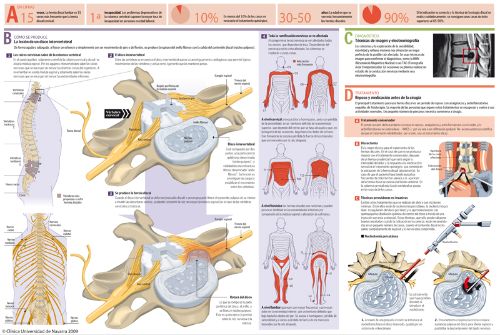 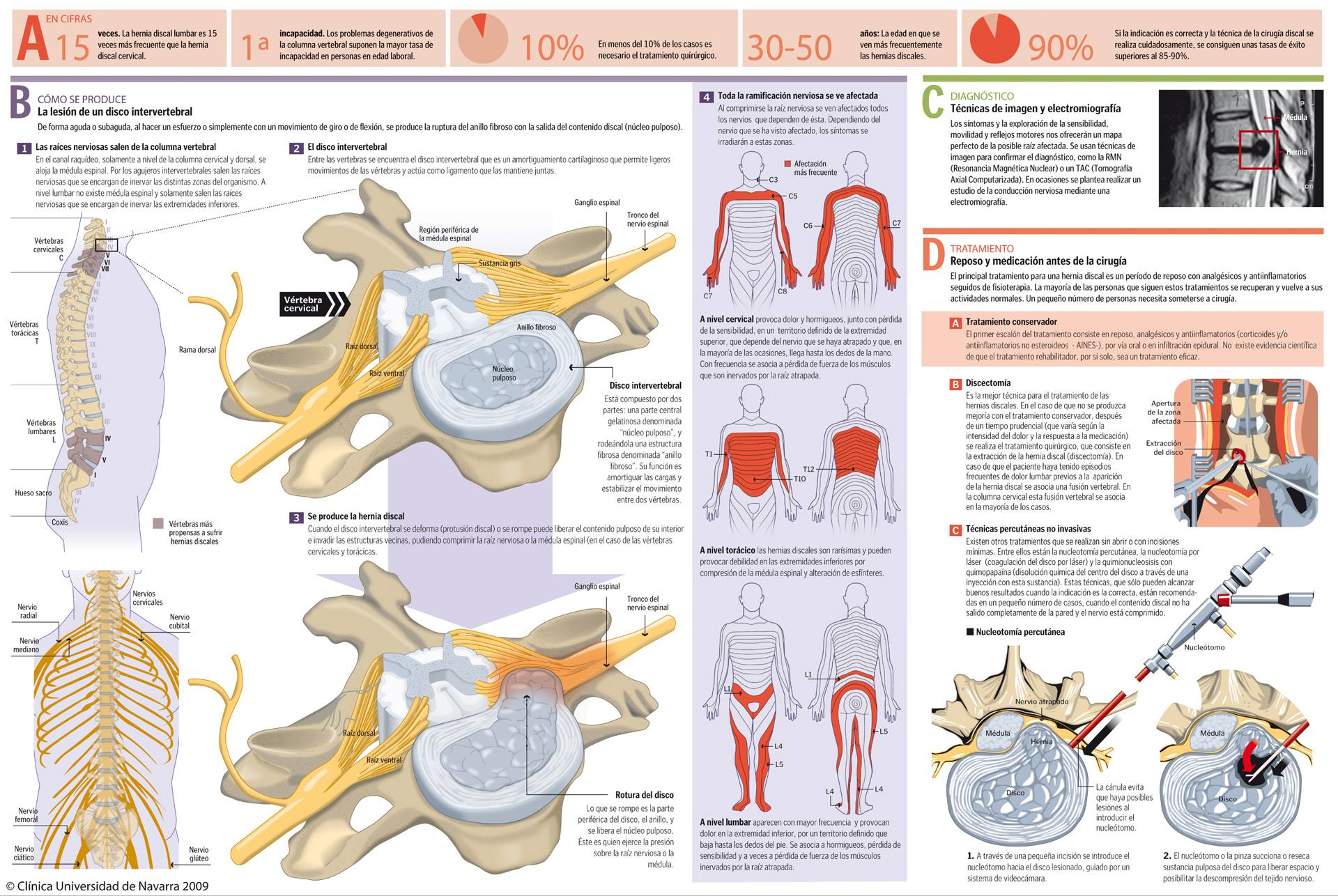 You may have a herniated lumbar disc

Who can suffer from a herniated disk?

Lumbar disc herniation can appear at any age although it is a condition that most commonly affects people between the ages of 30-50.

Therefore, it has a significant economic impact on the general population, since they are subjects in full labor activity.

What is the prognosis of a herniated disk?

If the indication is correct and the disc surgery technique is carefully performed, success rates of over 85-90% are achieved.

It is important to make clear that in disc herniation surgery, pain radiating to the lower extremity is more likely to improve than low back pain.

How is herniated disk treated?

Surgery for herniated disk aims to release the compressed nerve root, responsible for the symptoms. There are different techniques to achieve this.

The most efficient one so far is the removal of the hernia, associating a resection of part of the disc (from its center) to reduce the probabilities of its reoccurrence. It is a common procedure and can be done with or without a microscope and with an incision of 2 to 6 cm. (normal, mini or micro-discectomy).

Alternatively, some hernias can be operated with similar results by percutaneous means with the help of endoscopes. The patient has to be hospitalized from one to three days after the operation and will be able to get up the day after it. Once the admission is over, he will keep relative rest: he will be able to go out, but without bending his waist for about 4 weeks.

Afterwards, you must practice rehabilitation exercises to achieve a good recovery. If the indication is correct and the technique of disc surgery is performed carefully, the success is greater than 85-90%.